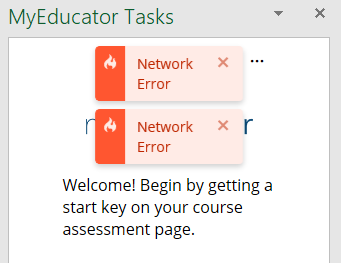 How the Add-in Works

The Microsoft Office add-in is just a webapp opened in a browser window embedded within Office applications. It allows the webapp to read/write from/to Office, but ultimately it IS still just a web browser. Microsoft selects the browser based on the following: operating system (and OS version), Excel version, and available browsers. Since IE, Edge, and Edge Chromium are all the 'native' browser for Windows, Excel uses the above criteria to determine which browser is used to open the add-in.

We're still not certain what's causing the network error with Microsoft, but we have found that it's ONLY occurring in Windows, and only occurs when the add-in is using the Edge Legacy browser instead of using Edge Chromium like it should. It could have been an update to Edge, the OS, or Excel that for some reason has broken some of the functionality. The only fix to the error we have found is to get the add-in to use Edge Chromium instead of Edge Legacy.

So that’s a lot of background info, but what is needed to resolve the issue?

Doing this SHOULD make it so Edge Chromium is being used when you open the add-in in Excel. If the network error is STILL being encountered, do the following: Open the add-in within excel, click the 3 dots in the top-right corner, select 'System Information'. If this info doesn't specify Edge Chromium, then something about the configuration is preventing chromium from being used (which would merit additional troubleshooting). There are also some instances where the system information doesn’t display Edge Chromium. You can confirm which browser is being used by right clicking anywhere in the add-in. If a menu comes up, the add on is using Edge Chromium.

We HAVE seen situations where Edge Chromium isn't being used, even with all of Microsoft's criteria being met. In this scenario, we'd want to ensure WebView2 is installed correctly, and ensure the version of Edge currently installed IS Edge Chromium.

To check the version of Edge, open a Microsoft Edge window, click the 3 dots in the top-right, Help and feedback, About Microsoft Edge. If that page says, 'This Browser is made possible by the Chromium open-source project', then it's running chromium.

If Edge is using Chromium, WebView2 is confirmed to be installed, and the add-in is found to STILL be using Edge legacy, re-installing Office would probably be the next move. The application cache can be cleared with a re-install, and we HAVE had a re-install correct the behavior.

Did you find it helpful? Yes No

Send feedback
Sorry we couldn't be helpful. Help us improve this article with your feedback.